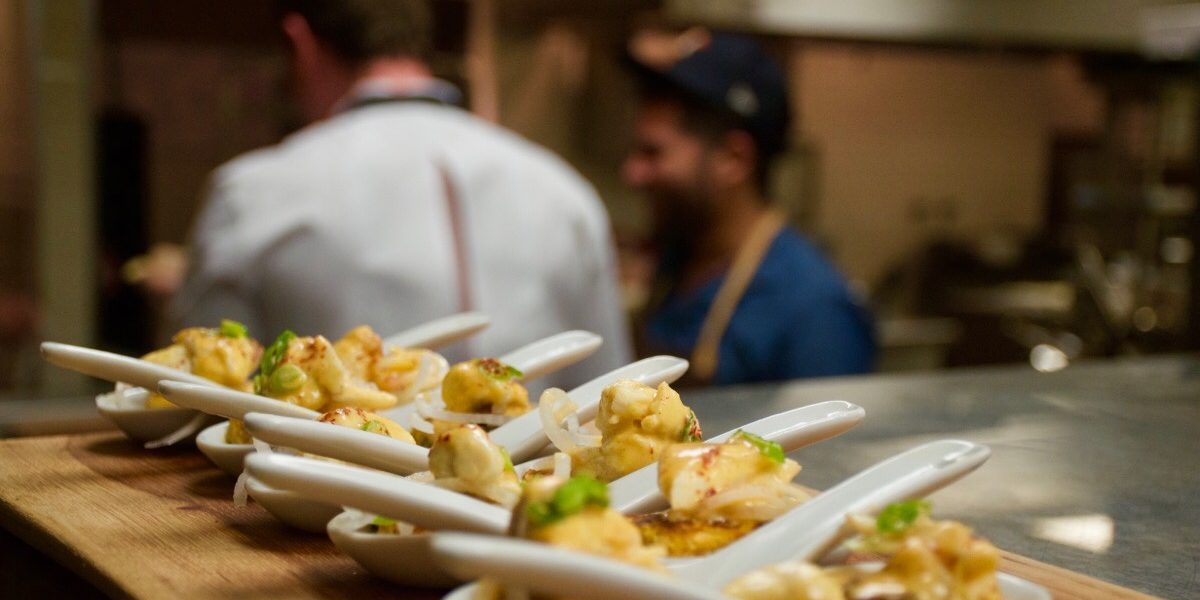 Two talented chefs. Eight courses. The Woodlands was treated to an exquisite Asian experience at CollaborEIGHT.

Chef Austin Simmons is on a tear. Originally moving to the Woodlands as John Tesar’s sous chef at the late, lamented Tesar’s Modern Steakhouse, Simmons quickly found a home with the Hubbell & Hudson empire, moving rapidly from the sous position to Executive Chef, where he quickly received notice from the food community. He helmed the Bistro, the Kitchen, and the catering operation, winning accolades for each. But it wasn’t enough for this ambitious young chef.

So, in 2018, he closed the successful Bistro and reopened it a few days later as the reimagined Tris, to universal accolades. Previously, he had launched a successful tasting menu restaurant, Cureight, giving him a venue to flex is creative muscles.

Having conquered the competitive Woodlands market, Simmons wanted to bring something new, different, and unique to his guests in the Woodlands.

The result is CollaborEIGHT, a series of dinners, each conceived by Simmons and a notable guest chef.

The latest event brought Chef Dominick Lee, of Poitin to the Woodlands. Chef Dominick moved to Houston from New Orleans, and attended the Art Institute under the inaugural Chris Shepherd Underbelly Scholarship. He was executive sous chef at Kiran’s, learning from Houston’s matron of Indian cuisine, before moving to the executive chef position at Poitin. 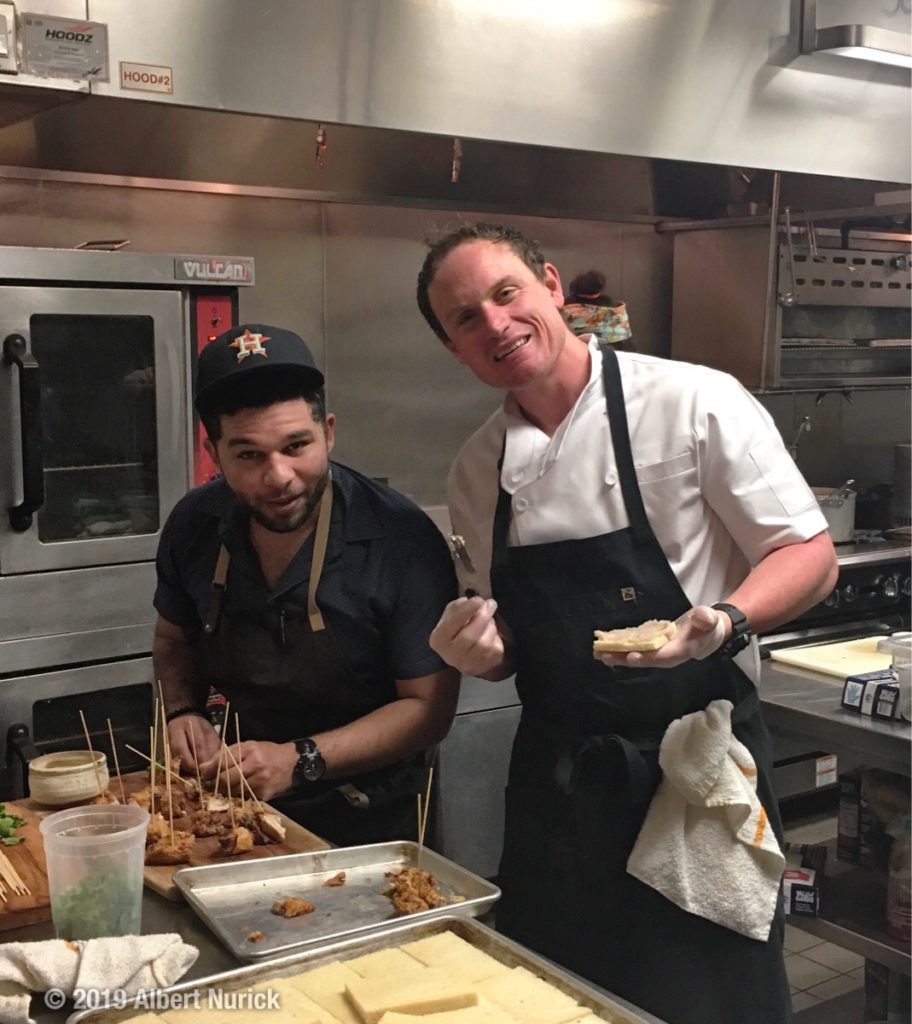 The theme for the evening had a definite Asian influence, with chef Dominick’s South Asian expertise melding with Chef Austin’s extensive knowledge from his travels through East Asia.

The evening started with passed appetizers. Pictured above are Chef Dom’s Fried Chicken Tikka Masala bites, a delicious spin on the new Houston trend of Indian-influenced comfort food. (The godfather of this new culinary style, Himalaya’s James Beard-nominated chef Kaiser Lashkari, was in attendance at this event with his lovely wife Azra. The pressure was on, and Chef Dom responded beautifully.)

Next, Chris Perry, Director of Operations and General Manager of Tris, passes bite-sized renditions of Chef Austin’s Kimchi Crab, a dish that has been wowing crowds at Tris since the opening. 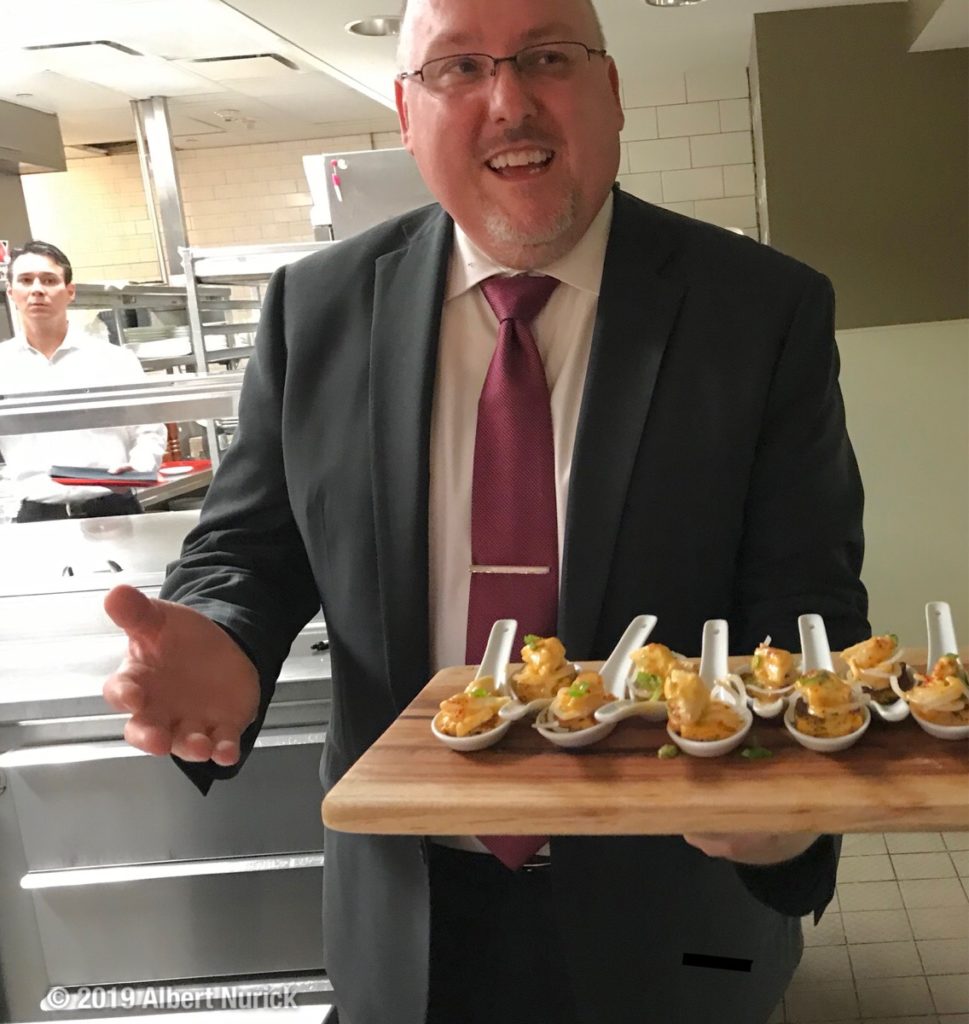 If the appetizers were any indication, the guests were in for a very special experience tonight.

The crowd was seated at the intimate dining space, and the first course appeared: Chef Austin’s Tom Yum Soup, accompanied by a nicely crunchy Shrimp Toast with sesame seeds. The bright, tangy flavors of the Tom Yum were complimented by the briny soulfulness of the shrimp. 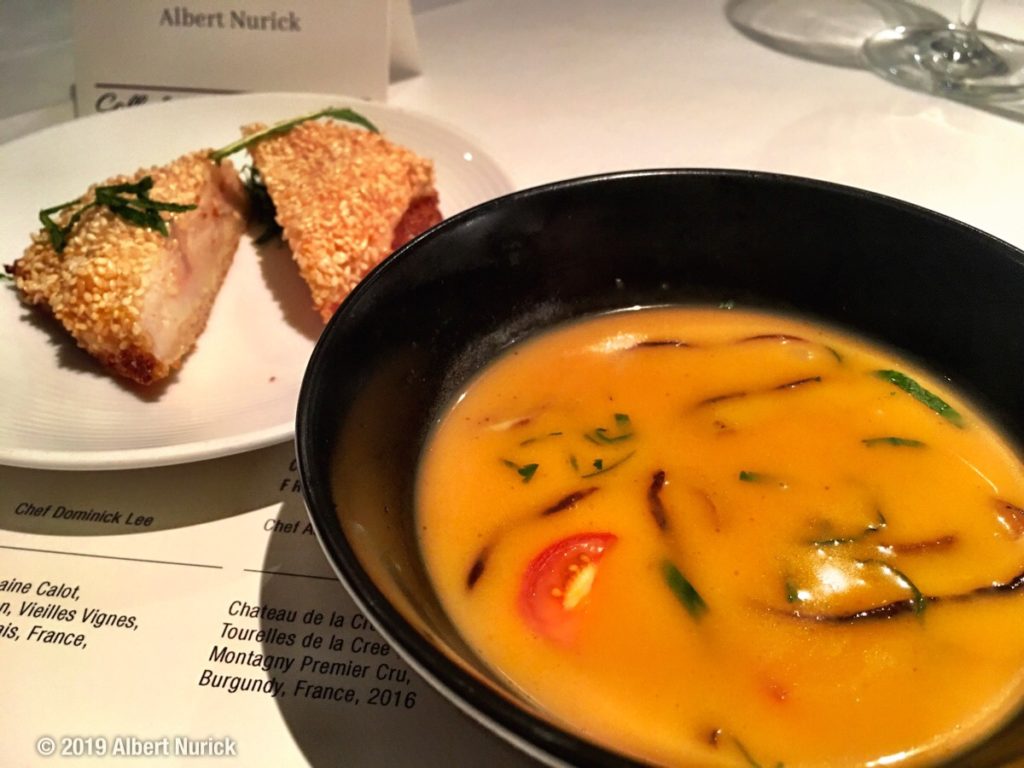 Next appeared Chef Dominick’s first dish: Duck Breast Korma. A beautifully braised and seared slice of duck breast was presented in a pool of light silky yoghurt-based sauce. Almonds and apricots added depth to the wonderfully tender and flavorful duck. 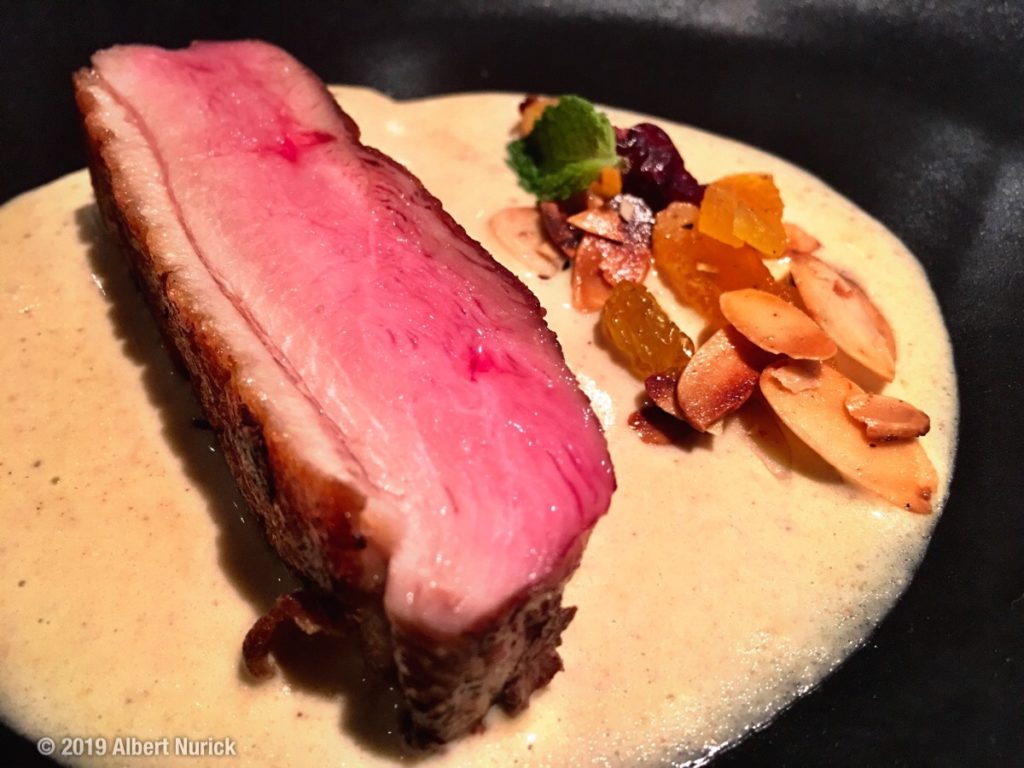 Now, it was time to kick things up. Chef Austin presented his Singapore Chili Crab with Fry Bread. Light, airy chunks of lump crabmeat surrounded by a zesty Singapore Chili sauce were combined with quarter-sized pieces of fry bread. The result was spicy (without being overbearing) and delicious. 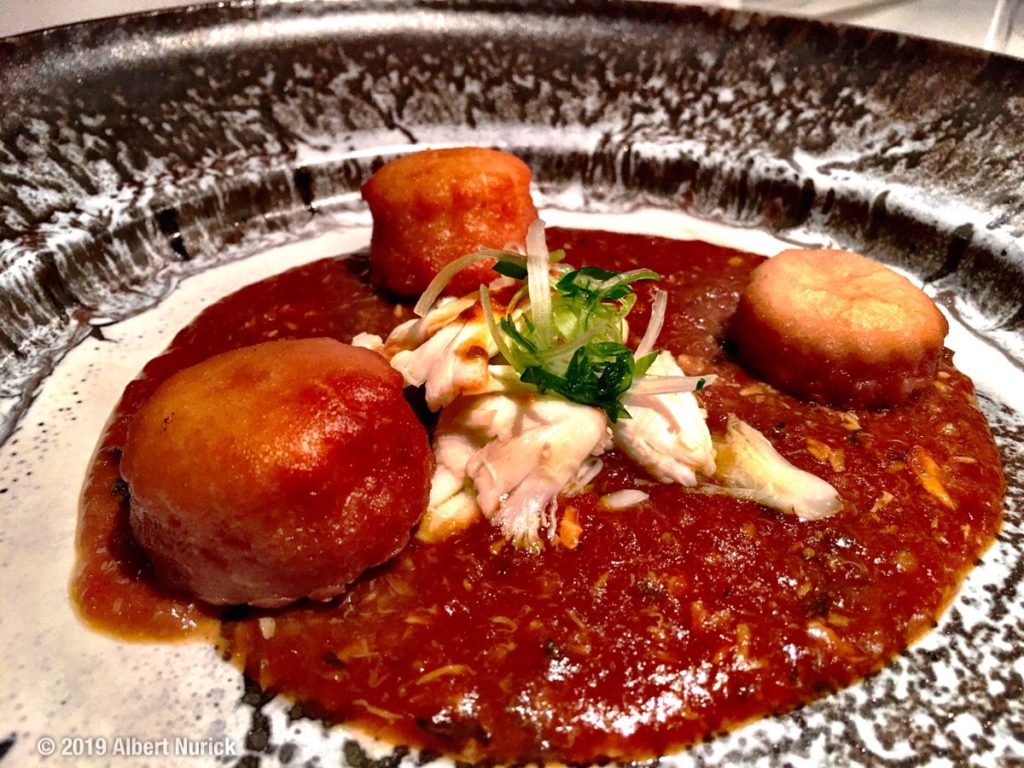 Next came Chef Dominick’s Pork Belly with Pindi Chana. The chick peas of the pindi chana were perfectly prepared; the chana masala that Chef Dom had whipped up was outstanding. However, the pork belly had issues. The skin’s desired crispy texture had been taken too far; it was hard an challenging to bite into. The underlying meat was rich, savory and tasty, but a touch dry. Regardless, we still enjoyed this dish; the delicious chana masala and the well executed chick peas saved the day. 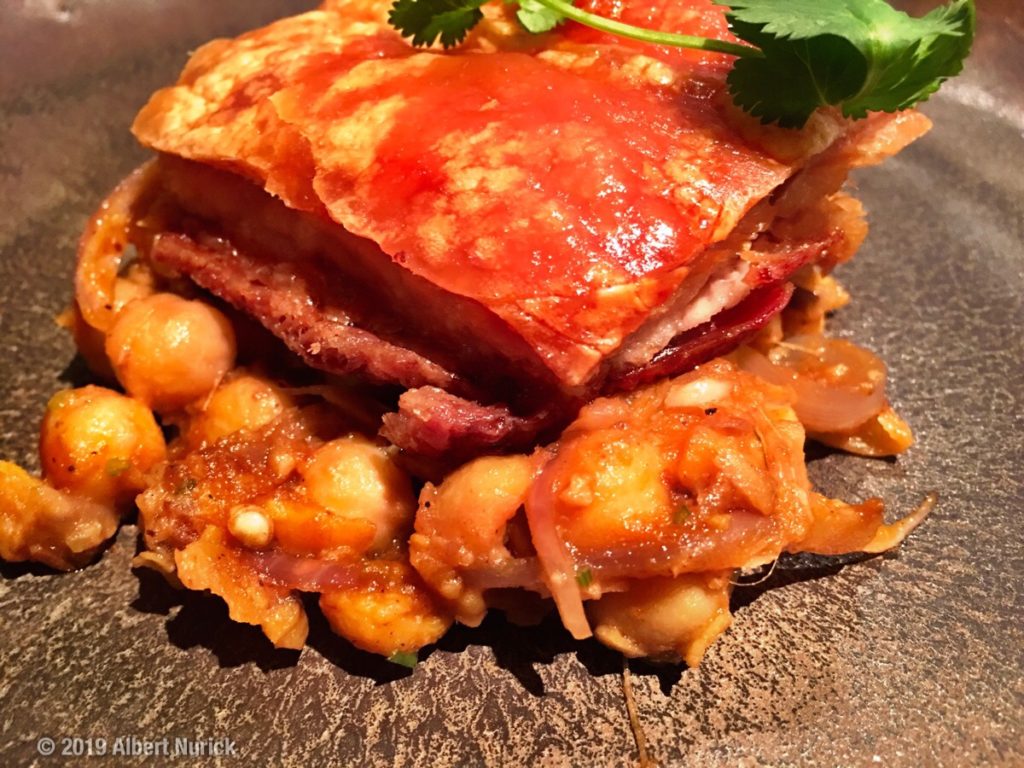 Heading east, we were presented with Chef Austin’s Korean Short Rib. Perfectly sous vide rib meat was combined with jewel-like pork dumplings, and the spicy Korean flavors were deftly balanced. This was our bite of the night; I hope this dish makes it onto the menu at Tris. 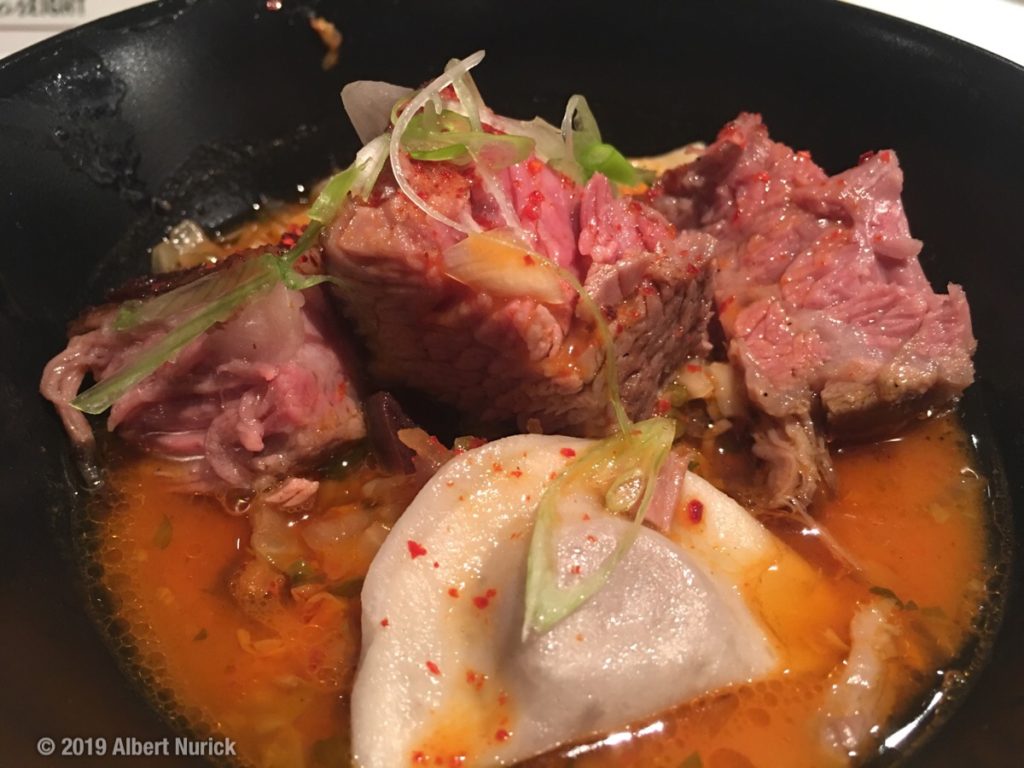 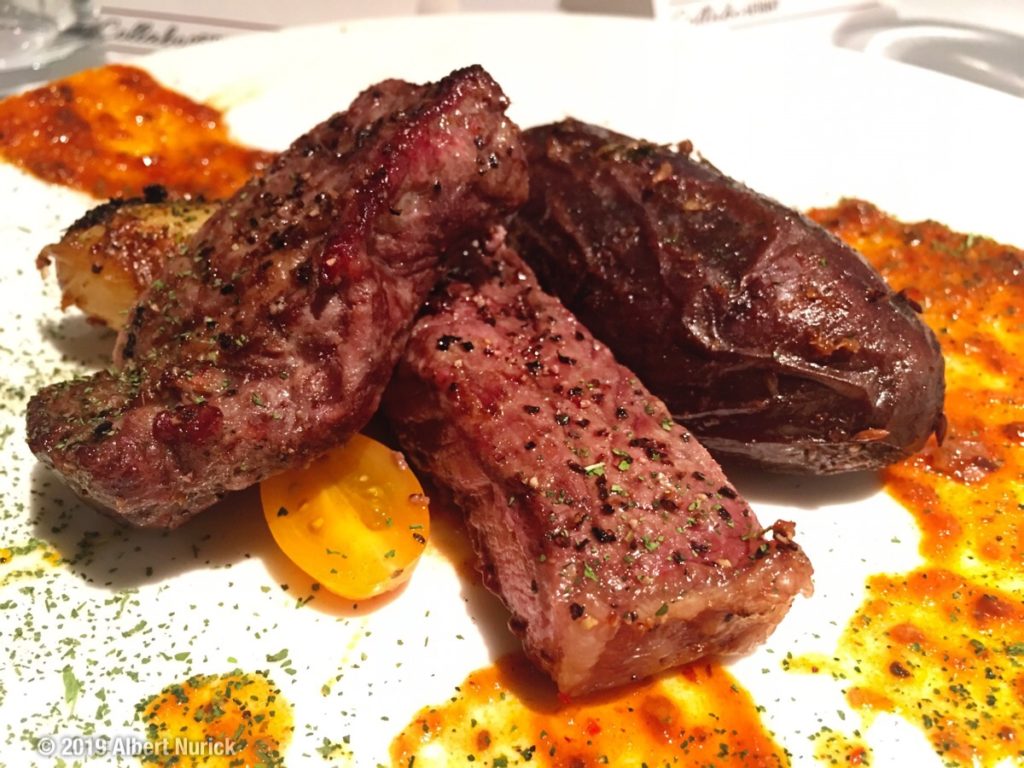 The dessert course was presented by Poitin’s pastry chef, Hani Lee. Her Balinese Mille-Feuille featured buttery, razor-thin French pastry with a cream filling. Asian accents of coconut and papaya carried the dish from France farther east, and the result was outstanding. A delicious denouement to a very memorable meal. 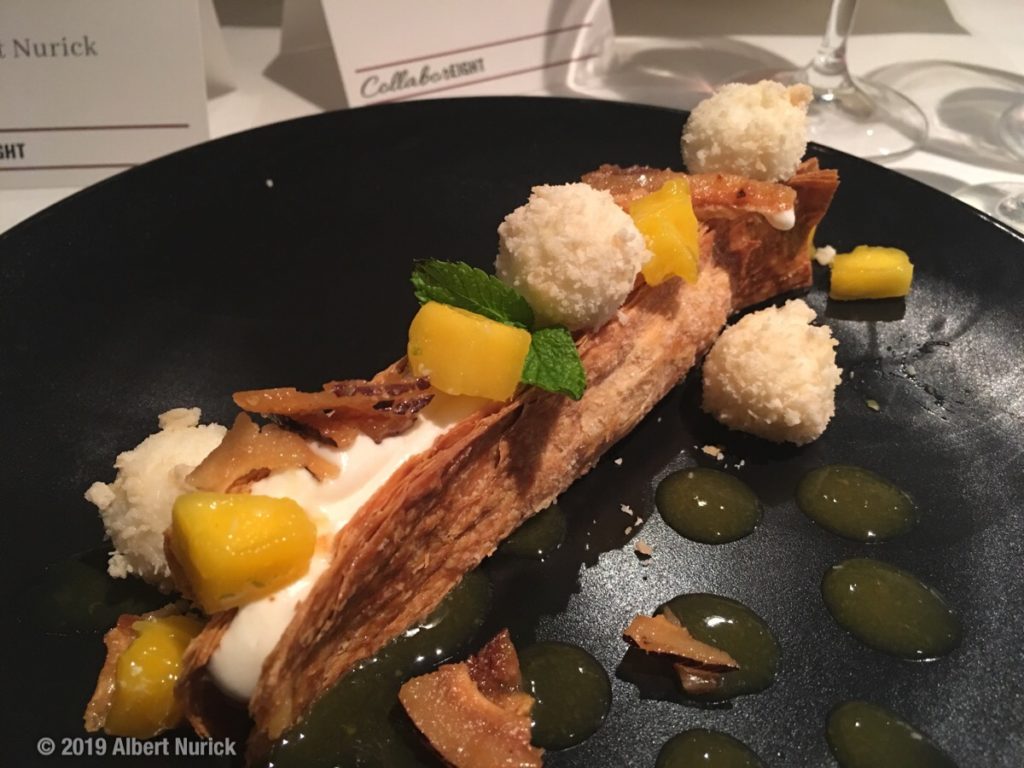 In bringing together multiple cuisines of Asia, Chef Austin Simmons and Chef Dominick Lee flexed their culinary muscles to the surprise and delight of the assembled guests. The attention to detail shown by these talented men was impressive; the skillful execution of the Tris and Poitin teams is worthy of applause. We look forward to future collaborations between such talented chefs. The Woodlands is very lucky to be able to experience such world-class meals here in our quiet little suburb. 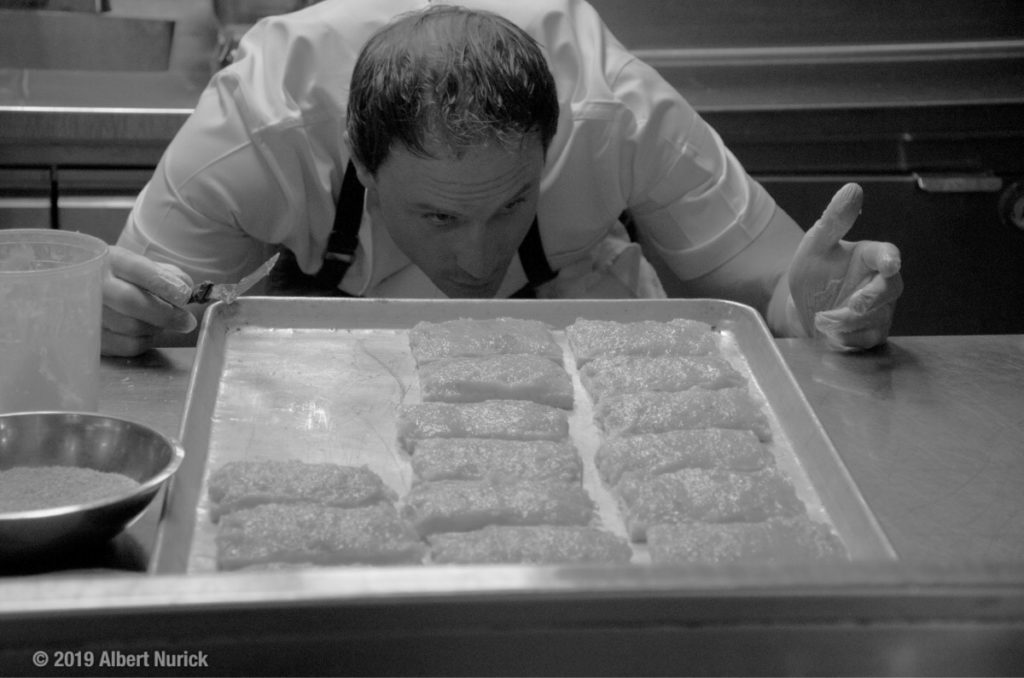 Mozambik brings upscale casual South African to the Woodlands
September 10, 2021
From Our Sponsors
The Best