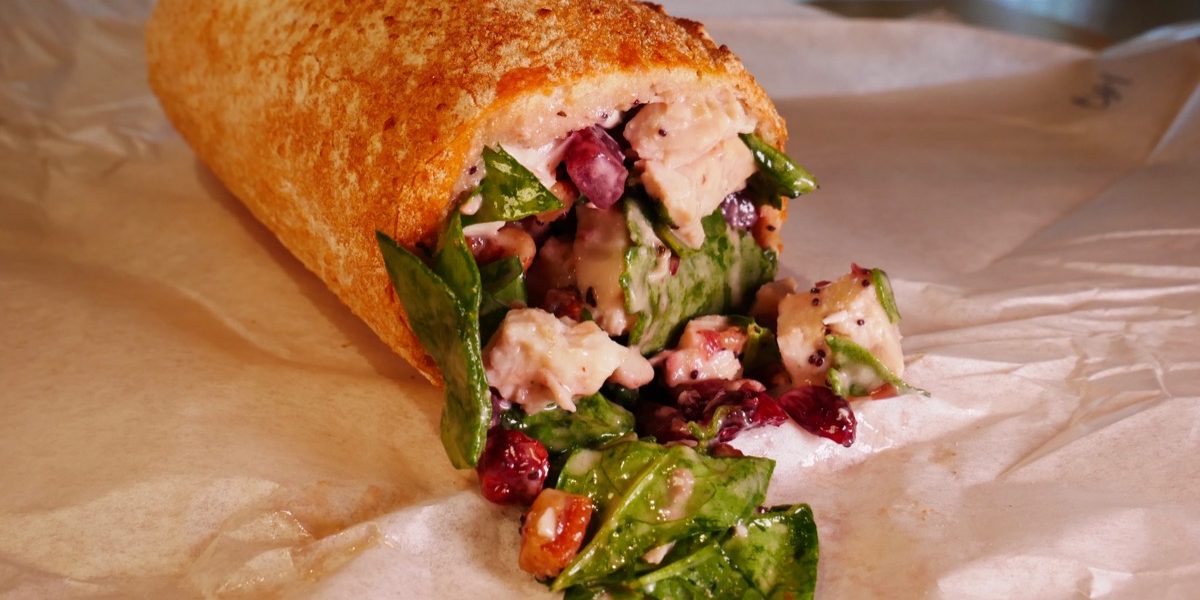 We’d heard the buzz about Bread Zeppelin, the new quick service concept located on the square in CityPlace, the new mixed use development just south of the ExxonMobil campus in Spring. And the buzz was good. Bread Zeppelin is a unique concept: Cool, crisp, made-to-order salads finished with housemade sauces, stuffed into a BreadMan Baking Co. French baguette that has been cored to hold the salad. We were intrigued, and we zipped down for a late Friday lunch.

Upon our arrival we were greeted by a sleek, modern establishment that was warm and inviting. Care had obviously been taken with the materials and finishes; the premium feel of the restaurant spoke to an attention to detail that’s often missing in quick service. We were greeted by a staff member who walked us through the concept and made some excellent suggestions. We wanted to try them all, but the fear of explaining this to our physician (Dr. Joseph Perkinson, a foodie and a superb MD) caused a bit of discretion to kick in.

As our first sandwich was assembled, we were impressed by the obvious quality of the ingredients. According to Matt West, Director of Brand Development (who is overseeing this new restaurant, first of its kind in the Houston area) the veggies are chopped in house, the proteins are cooked in house, and the incredible lineup of dressings (14!) are all made in-house, all from fresh ingredients.

The friendly, well-trained staff member assembled the salad portion of our creation, and asked us along the way if we wanted to customize it. We decided to follow the recipes of their chefs, and sampled their signature creations unchanged. Ingredient by ingredient was piled into a sparkling stainless bowl, and presented to us for approval.

After the ingredients were composed, the salad was dressed, and thoroughly tossed in the stainless bowl. The resulting made-to-order salad is then stuffed into a French baguette (sourced from Houston’s own BreadMan Baking, perhaps the best commercial bakery in town) that had been cored out, leaving perhaps 20% of the soft, pillowy french bread inside the crispy, golden brown crust.

The result is a bite that includes fresh, crisp veggies, savory grilled proteins, and flavorful housemade dressing, stuffed inside a crispy, pillowy French baguette. This is an outstanding bite; hearty yet light, crispy, fresh, crunchy, and zesty. It’s also really easy to eat, and like no other sandwich we’ve ever had. And each creation had its own unique flavor profile; we could explore the menu though many visits without a repeat. Some that we did sample:

The NOLA, with large fried shrimp, tomato, red onion, pickles, provolone, iceberg and a French remoulade dressing. Inspired by our neighbors to the east, this salad encompassed the spirit of a Louisiana Po Boy without the guilt; it was light and refreshing, with smooth, bold flavors that were balanced an never overpowering.

The Shanghai takes us (much) farther East. Grilled shrimp, carrots, slivered almonds, mandarin oranges, currants, crispy Chinese noodles, spinach, and Arcadian lettuce mix are finished with a complex carrot ginger lime dressing, and the sweetly savory combination is both pleasing to the eye and the palate. It’s rare to find Asian flavors executed well outside of a restaurant dedicated to the cuisine, but Bread Zeppelin nailed it.

The Plymouth Rock was our consensus favorite among some very strong competitors. Essentially American Thanksgiving wrapped in French bread from a Greek baker (how Houston is that?) the sandwich was an exercise in balance: Savory house roasted turkey, tangy dried cranberries, tart beets, earthy blue cheese, sweet caramelized pecans, and crisp Arcadian lettuce mix is dressed with cranberry poppyseed dressing. The result is delicious and utterly craveable, and you don’t have to deal with annoying relatives at Thanksgiving to enjoy it.

For those who are avoiding carbs and wish to 86 the delicious, crispy, pillowy-soft BreadMan Baking French bread, your salad can be delivered sans-bread, in a bowl. The result will still be a excellent dish. Here’s an example:

We went to Bread Zeppelin expecting to find tasty sandwiches and salads; perhaps a better spin on Subway. What we discovered was totally different. High quality ingredients, including the best bread in Houston, skillfully combined into well-conceived dishes designed by chefs who have a vision. The devil is in the details, and the Bread Zeppelin crew delivered, executing these creations extremely well.

The result is one of the most unique sandwiches to be found in our area, and very good entreé salads. We can’t wait to return and try the rest of the menu… if we can get past that Plymouth Rock, which we’re craving for dinner. Decisions, decisions.

Salads and Sandwiches | CityPlace and Outside the Bubble: Spring
Catering, Good for Vegetarians, and Outdoor Dining