Food Worth the Drive: Himalaya 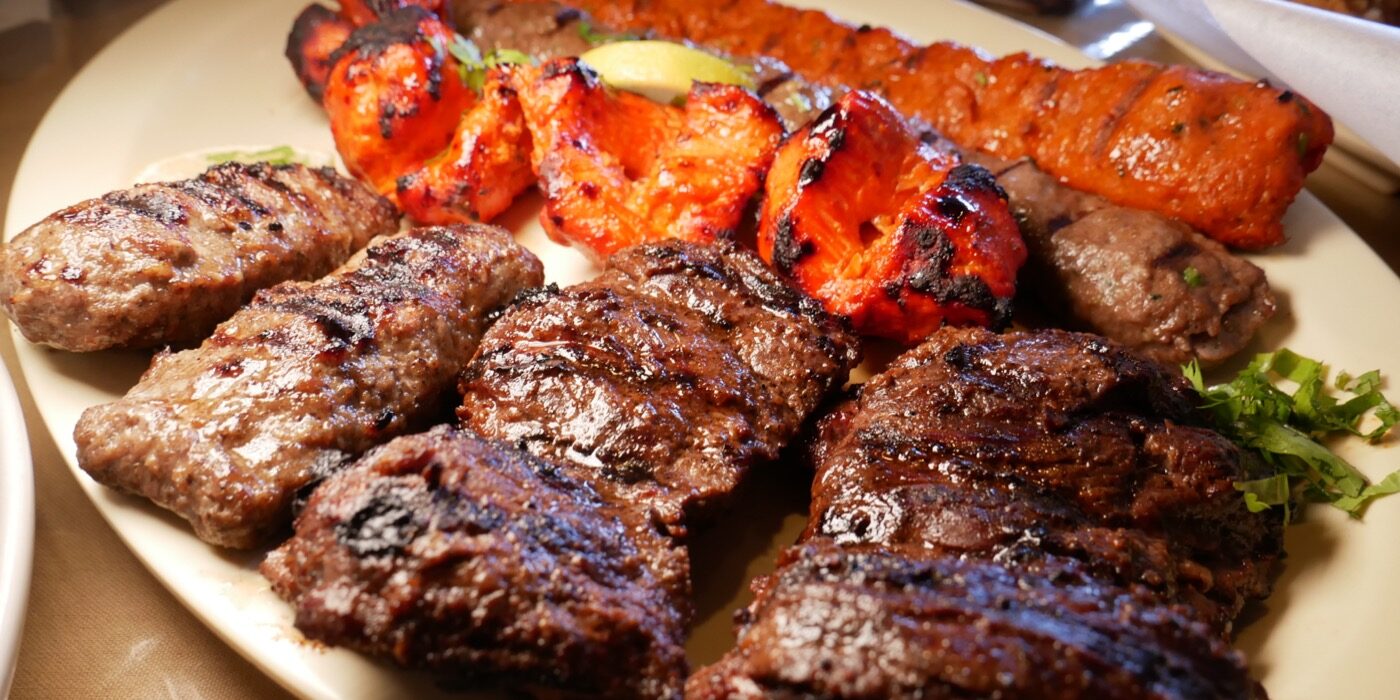 There are a lot of Indian restaurants in the Houston area. But when talk of the best Indian cuisine comes up, one restaurant is always mentioned: Himalaya Restaurant and Catering. Located about 45 minutes outside the Woodlands in southwest Houston at the intersection of Hillcroft and Hwy 59 (6652 S.W.Freeway @ Hillcroft, Houston, TX 77074), Himalaya has become the go-to spot for Houston foodies craving the best of Indian and Pakistani cuisine.

As much as we love our great local Indian restaurants (and the Woodlands area has some great ones, including Amrina and Palette Indian Kitchen), we often find ourselves making the drive to Southwest Houston to visit Himalaya.

Food Worth the Drive is a new segment we’re adding to TWTX.co; in it we feature outstanding restaurants that are outside the Woodlands area; ones that we feel justify the drive. We’re very fortunate to be close to one of the world’s great culinary cities, located in a state and a region with remarkable culinary tradition. Great experiences await, and we plan to take you around Houston, Texas, and Louisiana to discover great new places that are definitely worth the drive.

Founded by Chef Kaiser Lashkari and his lovely bride Azra (both of whom are there daily), Himalaya has been delighting guests for almost 20 years. And the patron list is a who’s who of national and local foodies: Anthony Bourdain was a regular when he visited Houston, Andrew Zimmern has featured Himalaya on his program, and the walls of this modest restaurant are covered (literally) with accolades from the media, both local and national. Chef Kaiser has been nominated, not once, but twice for a coveted James Beard Award, a feat matched by only a small handful of chefs in the United States. No restaurant in Texas (if not the nation) has been more recognized for its excellence.

The hospitality at Himalaya is warm and inviting. Chef Kaiser is ever present in the dining room, greeting guests and making suggestions for those overwhelmed by all of the choices on his menu. Unlike many restaurants, Kaiser and Azra are present every single day that they’re open, insuring that quality never slips and that customers receive the best experience possible. This dedication and work ethic are remarkably rare today, and are a key part of the success that Himalaya has enjoyed.

Speaking of overwhelmed, it’s a bit overwhelming to first walk in to the humble Mahatma Ghandi District location, and look around. The walls are literally covered (and by literally, we mean in the literal sense) with recognition from food publications from around the country. Many establishments have a “brag wall” with a half-dozen framed articles praising the restaurant. But Himalaya has hundreds; I wouldn’t be surprised if there are more in storage because the walls are out of space. It’s a stunning visual testament to the excellence that Kaiser, Azra, and their hard-working team achieve each and every day.

From countless local food writers to Houston’s James Beard Award-winning Alison Cook to national media from coast to coast to two nominations from the James Beard Society, Himalaya’s walls reflect the recognition that has been showered on the restaurant by those who know great food. We were lucky enough to run into the late great Anthony Bourdain at lunch at Himalaya a few years back; talking with him was an incredible honor.

The food at Himalaya is a broad mixture of creations from Chef Kaiser’s deep knowledge and fertile imagination. Ranging from Indian classics and Pakistani favorites to the chef’s modern fusion dishes, Himalaya’s menu is both broad and deep. Lovers of Indian food will be delighted; even those who are reluctant to try this cuisine will find dishes they love.

Curries are a core component of Indian cuisine, and Chef Kaiser has not only mastered the classics, but he has devised new curries that reflect his approach to feeding hungry Houstonians. Perhaps the most notable example is his Chicken Hara Masala, a verdantly green Hyderabadi curry that combines large chunks of moist, tender chicken with lush herbal flavors and a moderate degree of heat. Mexican food lovers will adore this curry; the unmistakable flavor of green chiles and cilantro pervades each bite. This curry is utterly unique, and available only at Himalaya; folks drive from all over the state for another bowl.

Of course, the traditional dishes are well represented. From the best rendition of Chicken Tikka Masala that we’ve ever experienced to the savory Tawa Gosht (Alison cook called this dish “berserk boeuf bourguignon”) to the Goan delicacy Lamb Vindaloo, Himalaya turns out a tremendous range of curries from mild to wild. One could spend many visits simply exploring the range of curries that Chef Kaiser has mastered.

Himalaya’s Biryanis are superb version of this Hyderabadi classic. Made with a base of fragrant Basmati rice, variations include mutton (Anthony Bourdain’s favorite), beef, chicken, and two vegetable versions.

Chef Kaiser is a master of grilled meats, many in the Punjabi tradition. The place to start is the Special BBQ / Grill Platter, which is a delight for any carnivore. Combining Lamb Seekh kabab, Chicken Seekh Kabab, Chicken Boti, Persian Kabab and Himalaya’s famous Steak Tikka (another Bourdain favorite) this dish is an introduction to the range of tandoori grilled meats that Texans can’t get enough of. We keep going back to this dish, because it’s very difficult to choose a favorite from these savory bites, but if we had to pick only one, Steak Tikka would be our choice. Not only is this house specialty a delicious north Indian dish, it’s one of the best steaks you’ll find in Houston, with flavors unlike any other.

Himalaya presents a rare Pakistani delicacy that’s not found anywhere else in the United States: Authentic Hanifa-style Hunter’s Beef. This south Asian beef creation is reminiscent of pastrami, but with its own unique flavor profile. Andrew Zimmern gave this dish his highest recommendation; meat lovers should not pass it up.

As we mentioned earlier, the cuisine at Himalaya goes beyond traditional Indian and Pakistani cuisine, to Chef Kaiser’s groundbreaking fusion dishes, which combine centuries-old desi spice and flavor profiles with modern American cuisine and sensibilities. He’s always working on new fusion creations; this keeps the experience fresh and new for Himalaya’s army of regular customers, many of which dine at the restaurant each and every week.

Perhaps the best example is the iconic Himalaya Fried Chicken. Considered by many foodies and writers to be the best friend chicken in the city (no less than Andrew Zimmern raves about it to this day), this profoundly flavorful rendition relies on Chef Kaiser’s secret blend of herbs and spices and a painstaking preparation, which begins days before the chicken even hits the fryer.

Whole chickens are broken down and marinated in a savory mixture of masala spices for 48 hours, allowing the rich flavors to permeate and perfume the tender chicken. Upon ordering, the chicken is dredged in a seasoned batter, and fried using the chef’s selected oil that is changed out frequently.

The result is nothing short of remarkable. Friend chicken is definitely a big deal in Texas, and Himalaya’s version stands alone with its incredible flavors that are infused down to the bone. Lovers of Nashville-style hot chicken definitely need to try Himalaya Fried Chicken; we think it’s the next step in the evolution of this American classic.

Chef Kaiser has also put his spin on another iconic southern favorite: The pot pie. This staple of southern cooks has been elevated to the next level. It begins with a housemade pastry crust, as light and flaky as the proverbial grandmother used to make. But that’s where things take a turn to the south; in this case, South Asia.

Instead of the tasty but often bland filling found in a traditional pot pie, Chef Kaiser kicks things up a notch or three with his Desi Pot Pie. He builds a savory combination of tender, juicy meats, fresh vegetables, and his own blend of masala spices to create a pot pie that’s incredibly unique and flavorful. Kaiser doesn’t do bland, and this dish is a perfect example of the wisdom of his approach.

The fillings of the pot pie change with the seasons and the whims of the chef, so be sure to ask what’s available. We’ve sampled several, and wouldn’t hesitate to order any of them again. And again. And again.

To say the food at Himalaya is broad would be an understatement; to say it is outstanding doesn’t do it justice. Chef Kaiser Lashkari and his team have wowed everyone from dedicated foodies to award-winning chefs to the media to national food personalities. The approach at Himalaya focuses on providing great food to each and every guest, and after numerous visits, we can confirm that they are experts at exceeding expectations time and time again.

If you’re seeking out some of the best Indian and Pakistani food in the nation, hop in your car and head down to southwest Houston to Himalaya. We think you’ll be delighted. It’s definitely food worth the drive.