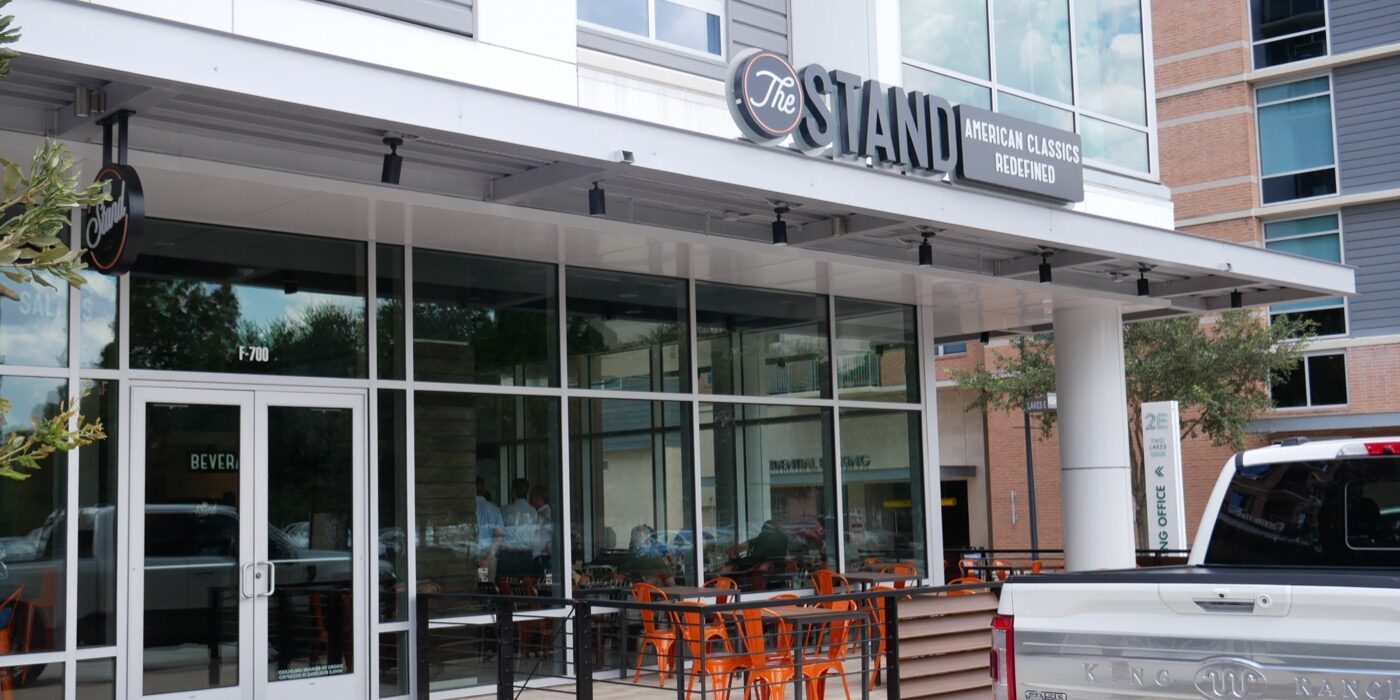 The Stand is located at 2000 Hughes Landing Blvd, in the bustling Hughes Landing development. Parking is easy, thanks to the big lot directly across the street.

The dining room is open and airy, surrounded by glass with views of Hughes Landing. Plenty of outdoor seating is also available.

The Stand has a philosophy of partnering with local providers to source the best meats, breads, produce, and other ingredients.

We sat down with the two brothers (Jason and Zachary Wishengrad) who run The Stand with their father, founder Murray Wishengrad. They fill us in on their philosophy, and what the Stand is all about.

We know what you’re thinking… “But what about the food?” For this soft opening, we started by sampling two different burgers.

The ABC Burger is a signature California burger. The hand-formed patty is dressed with fresh avocado, thick cut bacon, cheddar, lettuce, tomato, and The Stand’s very good housemade ranch dressing. It’s a nicely balanced burger, with the toppings accenting but not overpowering the beef-forward flavor.

The Stand Burger is the purist’s choice. The nicely hefty patty is crowned with grilled onions, lettuce, tomato, pickles, stand burger sauce. This burger really lets the beef shine through, and it highlights the care that culinary director David Selman takes with his beef.

The Stand is more than burgers, though. Looking down the list of sides, we were immediately drawn to the Lemon Sesame Brussels Sprouts, not a typical side for a fast casual spot. These Brussels are deftly handled; they’re light with a gentle misting of lemon essence, a refreshing contrast to the heavier approach that’s often taken with this popular veggie.

We very much enjoyed our visit to The Stand. Their light, modern approach to fast casual brings a distinctly California accent to the Woodlands dining scene.

Continuing Coverage:
TWTX.co gets the insider info with
David Selman, Zachary Wishengrad, and Jason Wishengrad
about the food and the philosophy at The Stand.

The food is health conscious without beating you over the head screaming “healthy”; clearly flavor and customer satisfaction come first. We think they’re a great addition to the Woodlands, and we look forward to returning and sampling more of their menu.

Burgers and more from this southern California concept

Burgers, Salads, and Sandwiches | Hughes Landing
Catering, Good for Kids, Good for Vegetarians, On the Radar, and Outdoor Dining