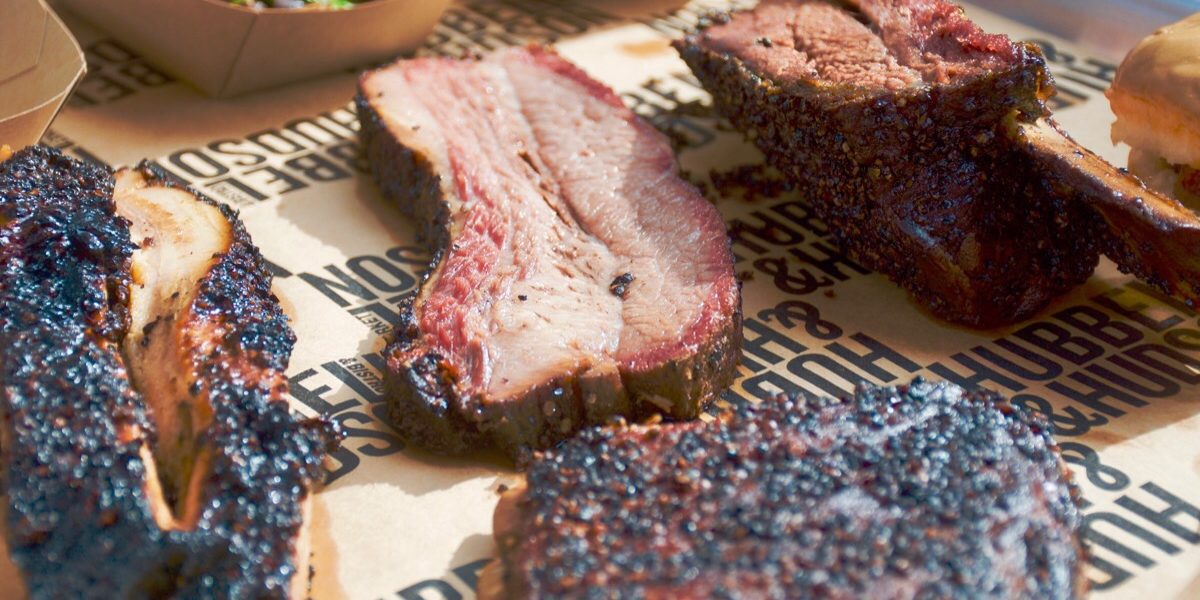 What happens when a world-class chef and and accomplished pit master join forces? We visit the Hubbell & Hudson Craft Beer & Barbecue Festival to find out.

Hubbell & Hudson put on its second Craft Beer & BBQ Festival on Saturday, November 4. After a full night of preparing the meat and manning the pits, Chef Austin Simmons and the Hubbell & Hudson team served world-class barbecue to the assembled cadre of hungry guests.

Simmons worked around the clock, manning the old-school fully manual pits, and keeping the smoky fire burning all through the night. 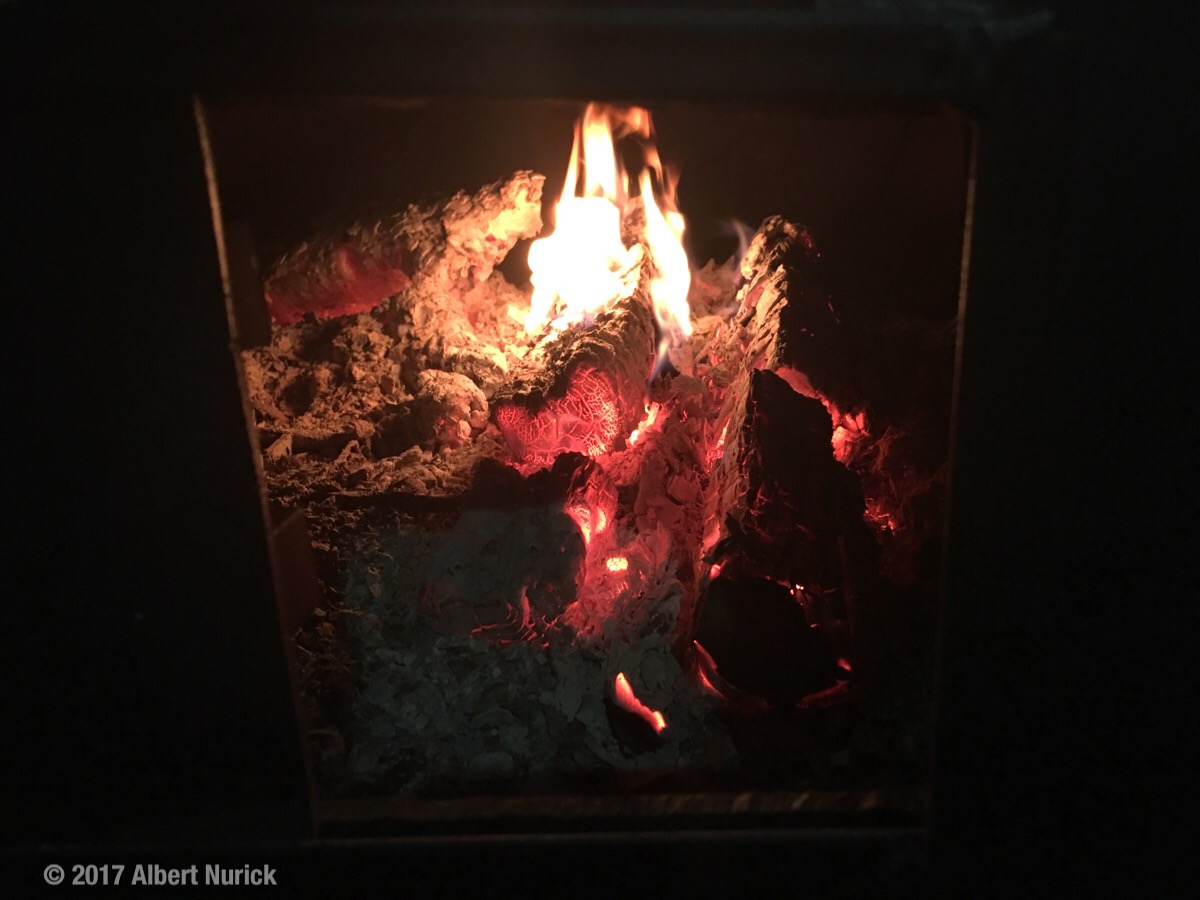 We stopped by late the night before to watch the progress, and they operated like a well-oiled machine. Many chefs have tried to incorporate barbecue into their repertoire, and have discovered how utterly different the skill set is. Simmons was demonstrates again the broad range of his skills. 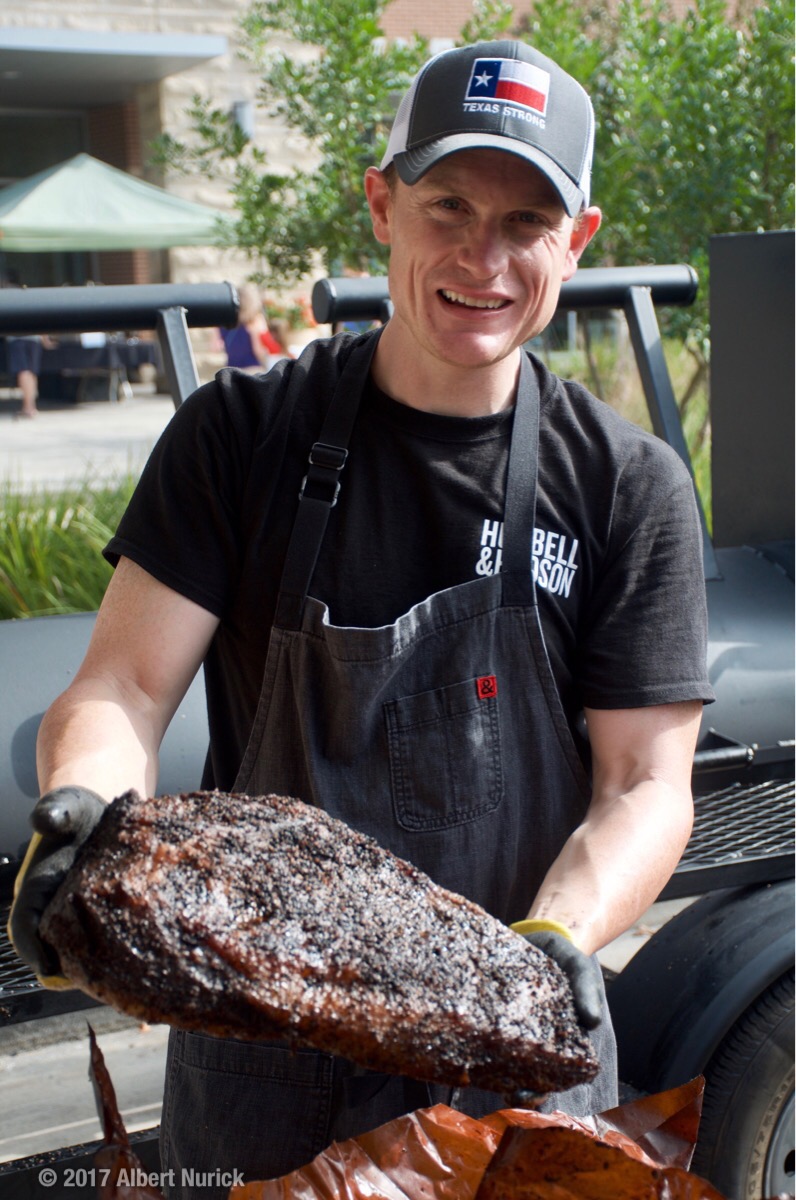 The result was a mouth-watering selection of smoked meats, such as this USDA prime akaushi brisket.

The brisket was moist, beautifully balanced between the subtle pecan smoke and rich beefy flavor. The peppery swagger of the rub added the finishing touch.

As much as we love brisket, the highlight was something you won’t find very often – dry aged beef ribs. In this case, 45-day dry-aged beef ribs, with a classic rub and just the right amount of smoke. 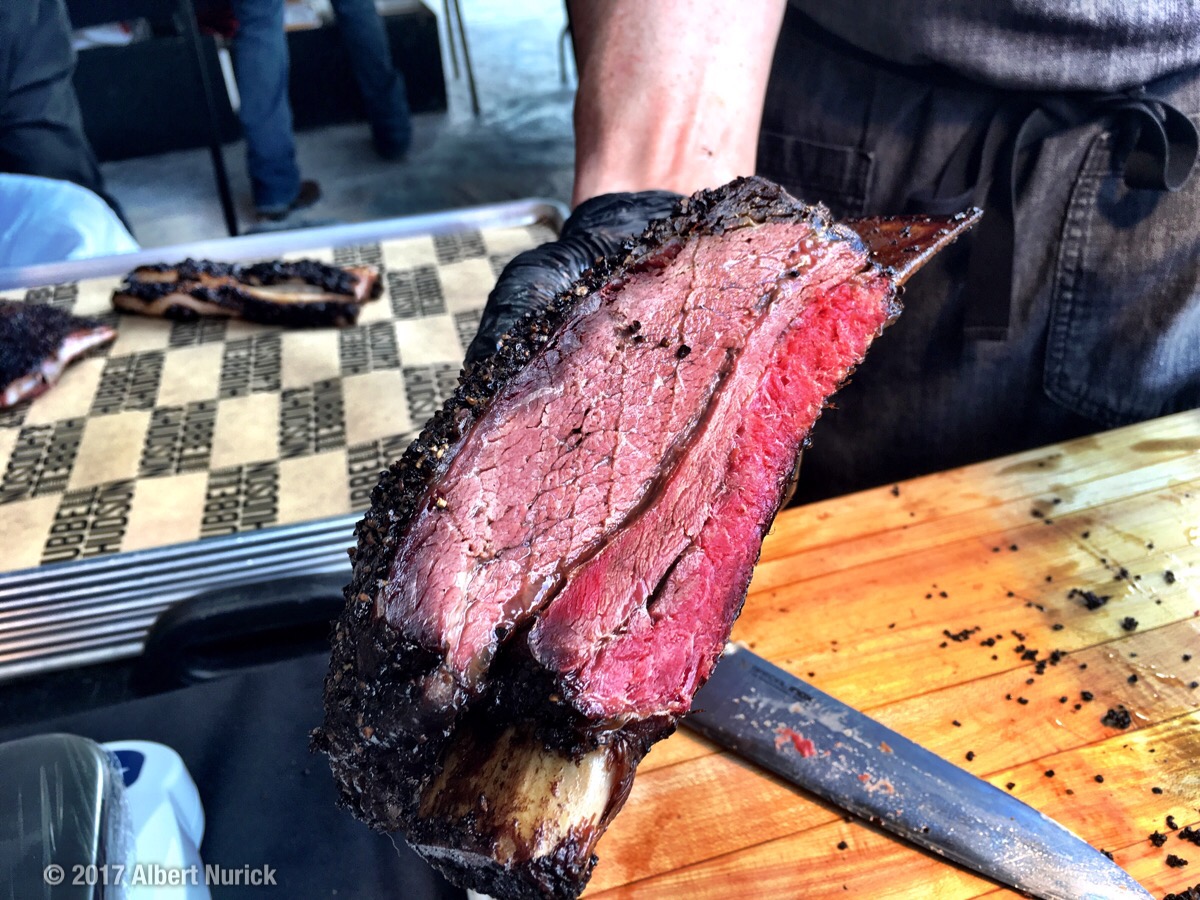 These ribs were a revelation; among the best barbecue I’ve ever tasted. The earthy, slightly funky flavor of dry-aged beef was further enhanced by the rub and the smoke of the pecan wood. This is a bite that I wish every barbecue lover could taste.

As we’ve learned with everything Chef Austin does, attention to detail combined with his exceptional creativity results in world class cuisine. And his attention to detail was in full force here; he and pitmaster Compofelice personally cut the barbecue to guarantee that each slice was exactly as they intended. 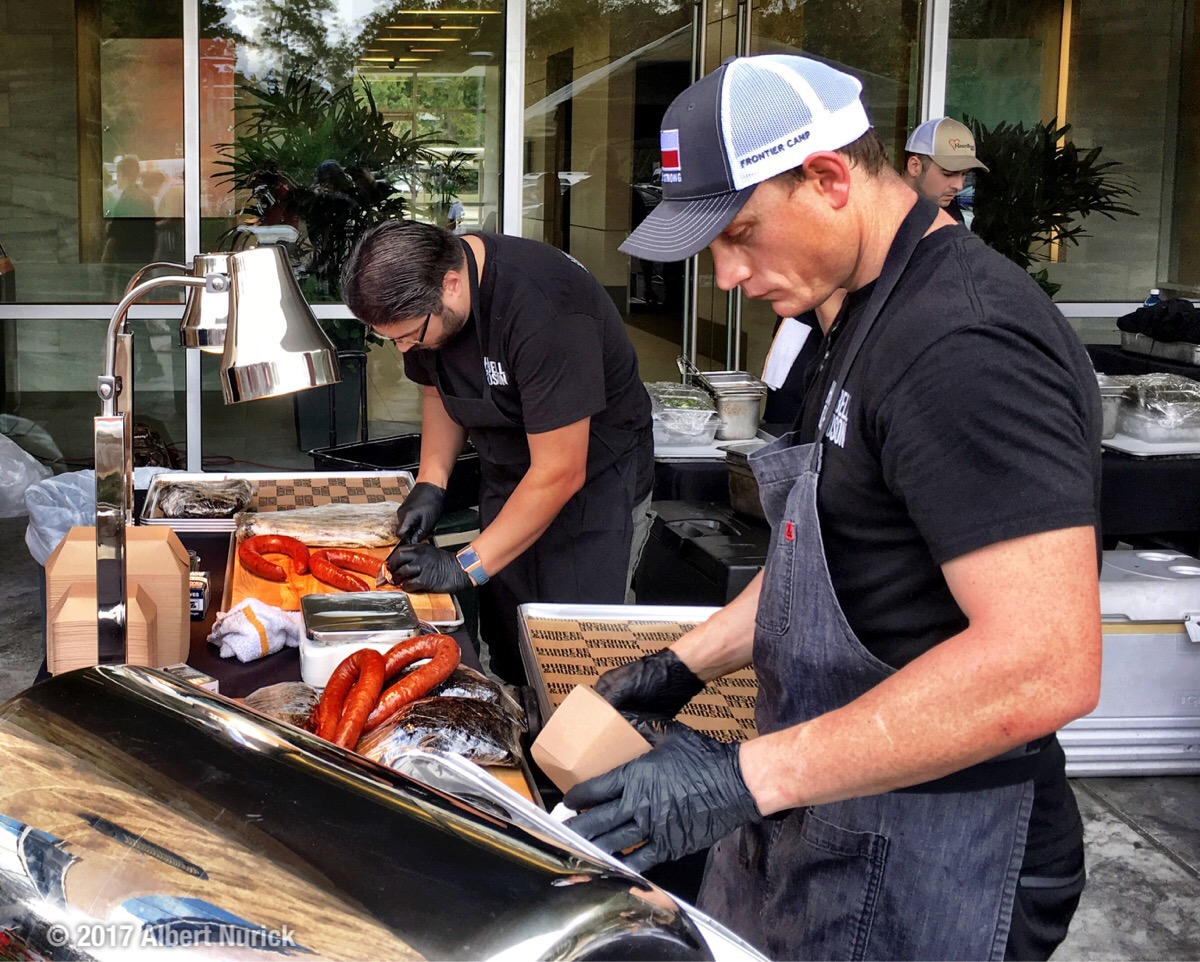 After a long night of manning the pits, they worked throughout the festival, slicing the meats and watching the delight on their guests faces when served this exceptional barbecue.

We anxiously await the next barbecue festival that Hubbell & Hudson presents. We won’t miss it, and we suggest that you don’t, either. 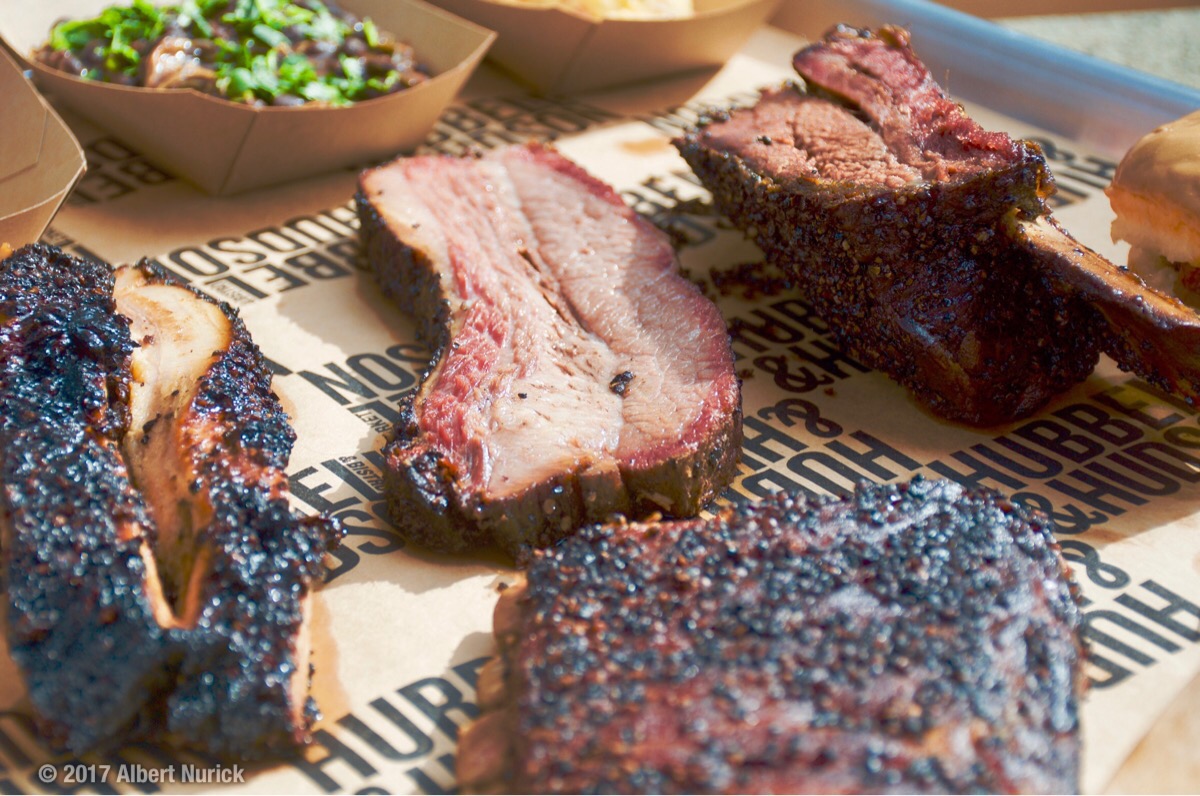 Back Table Kitchen & Bar to open at the Woodlands Resort
May 13, 2021
The Best